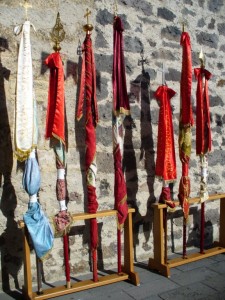 Flags of Saint Constantine and other saints of the country. On the afternoon of July 6, flags and religious knights go home of the obri. Ended dressing caddu ‘e punta and stock, we proceed with the blessing of the flags with the grain and flowers and the breaking of the auspicious dish. Blessing of the flags. Breaking auspicious plate. The procession, in front of riders and flags in tow, goes to church to pick up the clergy and go to the shrine of St. Constantine. Riders stop in the back streets of via Ulumos, as soon as the procession reaches the church, begins dared. The rifle placed against the churchyard and fire blanks at the beginning of the street, is the all-clear. Su caddu ‘e punta, crown, red shirt, flag in hand, leave in a wild ride and elegant to the church, he entered the gate, takes a round counterclockwise around the sanctuary and stands before the church. Leave other stocks, two by two, dressed in red and also in pairs, travel the same path of su caddu ‘e punta and reach it. Gradually, all the riders do the same rite, some pairs are formed by two riders, others on three. They run fast, but always elegant and perfectly matched. The speed, composure among the knights are the characteristics of a good climb. 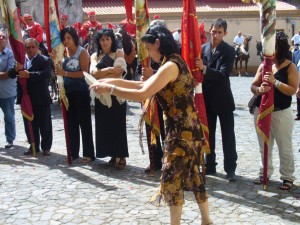 Caddu ‘e punta. The pending departure. Stocks. Departure. Once all the riders, including children with little horses, arrived in the square, opened the second moment of the race. Su caddu ‘e punta part and without notice in a frantic race around the church, followed by stocks and other knights of a hundred. Three times clockwise, toward the “good”, three turns counterclockwise to the “evil”. The people are massed along the route and in the churchyard, dust and gunfire. It is the commemoration of the Battle of Milvian Bridge, where Constantine defeated Maxentius and Christianity is the victory of good over evil. Legend has it that Constantine won thanks to a dream “in hoc signo vinces” and Constantine had the cross painted on the signs of war. In this way the iconographic tradition depicts the saint knight, on a white horse, with the crown and the flag and the symbol of the dream and of Christianity, the cross. Gone are the times around the church, the knights regained their output of the churchyard and get ready for another big climb away. Concluded that we went back to s’oberaju’s home.

The seven. The party

The morning of the seven repeat the same ritual of vespers. Only differences are a climb in most of the riders and the band taking part in the procession. The three saints, St. Constantine, St. Helena and St. Sylvester are brought in procession. Each truck has its richly decorated with carpets of rich local tradition with flowers. As for the party in September, the saints are carried on the shoulders. Until a few years ago a feature of the festival was the celebration of Mass in conjunction with dared, with a superimposition of the sacred and the profane. In this context, the same dared has a sacred meaning in the repetition and remembrance of the victory of Christianity over paganism. The laps around the church dissolve man from evil, represented by paganism and show the path of good, in fact represented by Christianity. The banners of flags, depicting the cross, are the very symbol of the battle of Milvian Bridge. Recent years, much effort was made break the tradition and celebrate dared and Mass at two different times and to allow the use of the Mass with the pilgrims, but losing in a way, not only history, but the true and sacral meaning of dared.

On the evening in the church is the exchange of flags s’oberaju outgoing delivery the flag to s’oberaju that will have the task of organizing the festival the following year.

In the streets adjacent to the churchyard you have hundreds of stalls selling the most typical roast fish and nougat and sweets. There are several dining options “sas barracas” prepared by the Committee and Associations of the country, in the churchyard is devoted to rides for the kids.

S’oberaju has the task of organizing the festival together with the committee, keep the flags of the saint and the funeral with the flag draped in mourning. S’oberaju choose su caddu ‘e punta, who will have the honor to drive the dared representing the holy and, in turn, su caddu’ e punta choose the top six stocks, which have the task to support him during the wild ride around the church and avoid the other riders who exceed them.

The festival is repeated in the same way on August 31 and September 1, Santu Antineddu. The only difference is that the saints are brought by the shoulder rather than to the truck adorned. The festival is more intimate, there are no tourists in July, there is a smaller number of horses, stalls. Perhaps this party was intended to allow even those who in July was busy with farm work, you can join the party.

WATCH THE PROGRAM OF THE FESTIVAL  2011