The construction of the sanctuary 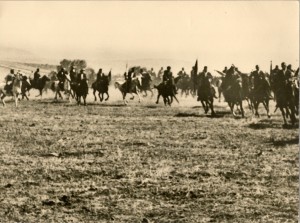 In the early twenties a group of veterans of World War I and emigrants living abroad, decided to build a shrine in his honor, to fulfill the promises made of St.Constantine. The construction of church lasted only three years, from 1920 to 1923 thanks to the work and the economic contribution of the entire population. Who could have worked as a mason, others lent oxen to transport the material, the women carried the water.

In 1923 Pozzomaggiore there were 4500 inhabitants and the economy was essentially agricultural and pastoral. On the left wall of the nave is a plaque that commemorates the consecration of the shrine, which occurred on July 5, 1923, and the names of the founders, those who contribute money to the construction of the church. The committee in charge of the festivities in honor of the saint is still partly composed of the descendants of the founders.

Legend tell that the saint’s statue was brought from Giave on a bullock cart, including the 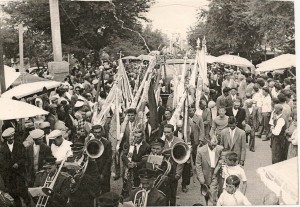 festivities and the participation of all pozzomaggioresi. The place where the church was built had already been prepared, but at the entrance of the village, at sa Punta, a yoke of oxen stopped its walk and there was no way, as far as he tried to restart the walk . Just then, they saw the hand of the saint with the point indicated a tanca still free. St. Constantine had chosen the place where the sanctuary would be built. 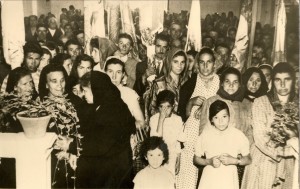 The Church was built in Art Nouveau style, with great technical skill and style by local craftsmen, excellent “mastros de Muru”, it seems that the designer was the engineer Sale native of Padria. The sanctuary is situated on a hill into the town for those coming from Sassari, at an altitude of 457 ml. About sea level, on an area of 10,000 square meters.

The system of the Church of surface area of 515.77 square meters, is oriented along the east-west facade to the west, consists of a long nave and wide ml 20.30 a barrel vault with 9.15 ml side chapels vaults. In the east wall of the nave, raised about 40 cm in size is found the presbytery 9.15 x 5.6 and on the west façade with the entrance to the Church. The first chapel on the left is used as a meeting room of the committee, the other on the right side as a sacristy.

The two chapels, one on each side, were built after the original construction in the second half of the fifties of the twentieth century. The structure is made entirely of blocks of trachyte local left visible, the main facade, gabled, has large windows and Art Nouveau. The nave is built using the barrel vault of brick, resting on the cross-shaped columns to a height of about 6 ml of floor level. The maximum height of the vault rises from floor level to approximately 10.50 ml.

The side chapels are covered by brick vaults, including vaults resting on square columns

for part of the cruciform inserted in the walls and spurs of field size 0.70 x 0.60 on the edge of the Church. The support of the vaults is at an altitude of about 3.35 from the floor of the chapel, which is raised 20 cm above the floor of the nave. The amount of the tax often run along the walls of horizontal moldings.

In the chancel is the altar made of marble that recalls some forms of the facade, there is a large crypt that contains the central equestrian statue of St. Constantine and two lateral crypts that house the statues of St. Helena mother of Constantine and Pope Saint Sylvester.

The front, though not richly worked has all the elements necessary to give a pleasant attitude. The prospect of front is focused along a central axis, with a median door framed by large segments pale stone and surmounted by a lintel decorated. Above the lintel insist two double windows with polychrome glass on which there are two limitations of limestone pilasters clear that part of the architrave of the door end based on the final cusp. 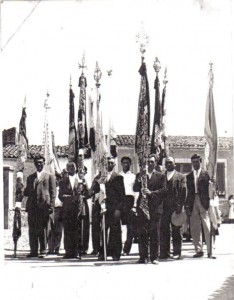 Pilasters as many insist on the edge of the main facade but in pink trachyte and depart from the plane of the floor to finish based on the tympanum of the facade. The four pilasters are topped by many elements of white limestone shaped like a parallelepiped and is based on the cusp of a great final cross surmounted by a statue of St. Constantine on horseback. On either side there are two windows with polychrome glass ending with a round arch. The plan sets the arches of the windows is made by a band decorated with capitals. At the height of the architrave, pilasters was made between a checkerboard pattern on the horizontal line of the prospectus, that plea was obtained from internal segments of alternating squares of white to pink limestone facade, this decoration is defined by a molded frame to the share of basic windows.

Are currently under major renovation that will eliminate many problems of a static nature, dignity and security of the Church.